I read with interest an article in the Sunday paper a few weeks ago on the assertion that Bees ‘Decision Making Strategy’ could help the business world to come to more informed decisions. 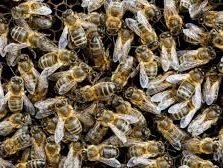 Bees in a Hive making decisions

Apparently swarms send out ‘scouts’ to assess the quality of a potential site for a hive. The insects then report back to the old hive and do a ‘dance’ to describe the benefits of the site. The study concluded that the swarm then comes to a group decision on the best site by revisiting sites recommended by others until a consensus emerges and all the bees are performing the same ‘dance’.

Actually of course there is no need for any kind of rationalisation process – bees returning from many potential sites will do a dance (‘large wiggle’ for lots of food, ‘direction of dance’ to show where it is and ‘length of path of dance’ to show distance from here) and bees communicate by ‘imprinting’ the movement of the dance in the hive until they get it then off they fly to have a look. Those sites that indeed have a good supply will result in more returning bees doing a repeat performance of the original dance whilst bees that return dissatisfied give a less that enthusiastic display. As a result of this reinforcement process bees will over time appear more frequently at the good sites which may look like a rational process has occurred but is in fact a conditioning process.

The study published in the Philosophical Transactions of the Royal Society measured the success of different decision-making processes and showed that if the bees relied on the ‘cosmic accident’ as they put it of all the bees eventually stumbling on the same site, it would leave the swarm homeless and vulnerable. On the other hand if the bees blindly followed the recommendations of other bees without checking the sites out for themselves there is no guarantee that it will be the best decision either.

The study concluded that sending out scouting groups resulted in the best decision. From this natural system they then made the leap of faith to suggest if Humans adopted this process then better investment decisions (for example) in the stock market could be made, groupthink avoided and investors will avoid getting stung! There is some truth in this as investment decisions are often made on the basis that if one stockbroker buys stock in a particular company then it must be good – thus a stampede is generated and everyone buys in and a bubble is created that eventually bursts. The lesson being that if decisions are made by considering options, whether there is real worth in a company (dividends etc.) before a decision made then this is a better decision making strategy.

In decision making strategies in the real world this is what is recommended, proactively acting on the world (scouting), deciding effectively by weighing and thinking about options then moving to action is a known and sound strategy. The problem is it takes thinking power to effect such an approach and there are few who actually do this in practice. In the normal run of events, when the economy is growing or things in a company are going well, then we can get away with sloppy decision making.

What recent events have shown is that many so-called experts did not engage themselves in a deep way with their decision making, had little idea of what they are deciding and did not engage in down side risk analysis. Unfortunately all things that take significant cognitive resource and effort of will to do well – and in today’s quick and dirt world there is little reward for doing it right especially when sloppy thinking and management practice gets bailed out by the taxpayer as we are now witnessing across the world.

See more posts like this in my Resources Section
Why not get posts in your inbox by subscribing to https://roymogg.substack.com

The post Bees show the way to make good decisions appeared first on .